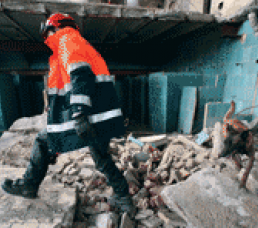 - The “rescue dogs” search for (living) persons buried under the rubble after buildings falling down or earthquakes.

- The in Dutch so-called “vlakterevierenhonden” search systematically vast areas without a track or reference smell. These dogs search for each person they can find.

In Belgium there are over 20 relief teams with dogs. They are members of the fire departments or the Civil Protection and passed, after a thorough training to become a relief dog team, the exam of the specialization(s) of choice. Afterwards the dog handlers still practice on average 1 to 2 times a week with their dogs to keep up their own skills and those of their dog(s) regarding searching under the rubble, obedience, agility and endurance.

In the event of a calamity, disaster or claim, the Director of the Operational Command Post (Dir-Pc-Ops) and the Commander of the rescue zone or his substitute may request the intervention of a rescue dog team via the rescue centre 112.